Wav2vec 2 is the successor of the Wav2vec model and was developed by Facebook AI. It can be used for performing speech recognition tasks. Among others, it can be used for speech 2 text tasks. 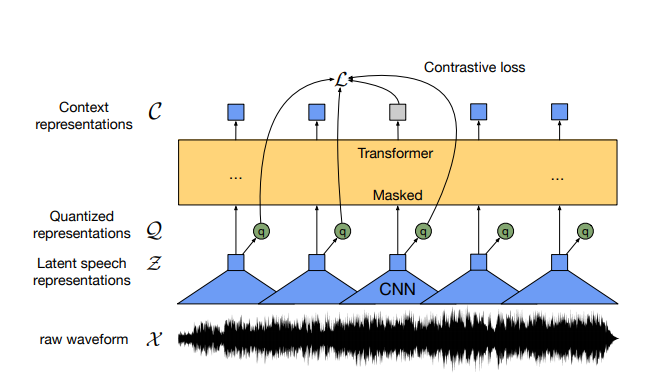 * The Wav2vec 2 architecture is composed of a flow from a raw waveform into an output classification (if finetuned) or context representations (if only pretrained).
* The raw waveform is first windowed and fed to an 1D ConvNet. This ConvNet, which has 7 blocks of kernel widths (10, 3, 3, 3, 3, 2, 2) and stride (5, 2, 2, 2, 2, 2, 2), produces 512 feature maps per layer. The output of the ConvNet is called a “latent speech representation”, i.e. more abstract (latent) representations of the raw waveform. Here, GeLU activations and LayerNorm is also applied and raw waveform input is normalized to zero mean and unit variance first.
* The outputs of the ConvNet are fed through a Quantization segment, which performs product quantization: selecting closest discrete vector representations for a continuous vector to reduce set of possible vectors. This is done by generating G codebooks with V entries, choosing one from each codebook and concatenating, then applying a linear transformation to get the discrete vector. A Gumbel Softmax function is used for this. The why: previous work has shown that using this approach works great (and we shall see in describing the Loss how these are used).
* The outputs of the ConvNet are also used as inputs for a Transformer model, which is also called a “context network”, generating “context representations”. Instead of fixed positional encoding (which is what the original Transformer does), this one uses a Conv layer as a relative one. The output for the positional encoding is added to the input and then LayerNormalized. A proportion of the inputs to the Transformer is masked in order to perform a MLM task during pretraining. Note that inputs to the quantization segment are not masked.
* For finetuning, a Feedforward segment is stacked on top of the Transformer model, as is common with Transformer finetuning (e.g. using the C class value in BERT finetuning).

Wav2vec 2 pretraining:
* Pretraining uses a loss function (L = Lm + alpha * Ld) combined of two sub losses, “contrastive loss” (Lm) with “diversity loss” (Ld). Here, alpha is a tunable hyperparameter for the diversity loss.
* Contrastive loss measures how well the model is capable of generating a quantized vector for any masked Transformer input. In other words, how well it is capable of generating a generic output value close to the input value.
* Diversity loss measures how well the model is using the variety of codebooks when performing product quantization. The more codebooks are used (i.e. the more balanced the weights in the linear operation generating the quantized vector from the concatenated codebook vectors), the better.

Wav2vec 2 finetuning:
* A CTC Loss is used during finetuning, with SpecAugment to avoid overfitting.

Model setup for finetuning:
* Dependent on the dataset used for finetuning, but some general aspects too.
* ADAM optimizer, tri-state LR schedule (10% warmup LR, 40% constant LR, then linear decay).
* BASE used 3.2m samples/GPU (8 GPUs); LARGE 1.28m samples/GPU (24 GPUs).
* First 10k iterations only updating weights of the classifier segment on top of the Transformer, then also the Transformer itself.

Results for high-resource training (= fine-tuning with 960h of data)
* Here, too, the model improved performance, for both BASE and LARGE.

Conclusions:
* Wav2vec 2 shows that it is possible to use Transformer based models to pretrain on large, unlabeled corpora, and get good results with a variety of dataset sizes during fine-tuning.
* It works with big fine-tuning datasets, but also with smaller ones.
* This is promising for low-resource situation, e.g. in the case with very obscure languages, or personal language situations / tasks.

My name is Christian Versloot (Chris) and I love teaching developers how to build  awesome machine learning models.

Stay up to date about ML developments 👨‍🎓

We post new blogs every week. Sign up to learn new things and better understand concepts you already know. We send emails every Friday.
By signing up, you consent that any information you receive can include services and special offers by email.

Looking for something in particular?

Although we make every effort to always display relevant, current and correct information, we cannot guarantee that the information meets these characteristics.

Stay up to date about ML developments 👨‍🎓

We post new blogs every week. Sign up to learn new things and better understand concepts you already know. We send emails every Friday.
By signing up, you consent that any information you receive can include services and special offers by email.